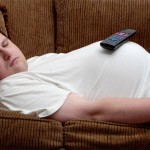 He’s burning fat thanks to the afterburn effect . Maybe.

The “Afterburn Effect” is sexy.  It’s popular.  It even sounds cool.

“Sitting on the couch?  Au contraire.  I’m basking in the Afterburn Effect.”

See what I mean?

First, What Is The Afterburn Effect?

EPOC studies are often cited as a means for supporting the idea that shorter, more intense conditioning workouts can have the same (or greater) net caloric burn as longer cardio sessions done with less intensity.  Most people would agree that a more intense exercise session will result in a greater amount of EPOC.   But is the EPOC effect massively overblown?  Or is it a valuable tool in the battle against the bulge?

Two Questions:  How Much?  How Long?

To determine if the afterburn effect has a significant impact on weight loss, we really need to determine “how much” and “how long.”   How many calories can be burnt via EPOC?  And how long does the EPOC effect last?  Popular marketing content states that EPOC increased “whole body fat burning by 36% after exercise!” And that the effect could last for “38 hours after the workout ended!” (1)

Hmm… a special workout program that increases the calories burned after you’ve finished exercising by 36% for the next 38 hours?   Sign me up!  Oh wait, first we should probably check the research.  Before we dive in to the geek stuff, let’s clear up one key point: Studies show that the magnitude and duration of EPOC is dependent on the intensity and duration of exercise.(2)  In other words, if your workout leaves you crumpled on the floor crying for your momma, you will enjoy a greater EPOC than somebody who walks out of the gym fresh as a daisy.   This point seems fairly obvious, but it adds a new wrinkle to the puzzle which we’ll explore later in this article.

One study took a group of people and had them exercise on a treadmill for 80 freaking minutes (yeah, that’s a long time.)

The harder you train, the greater the EPOC effect.

Unsurprisingly, the group that exercised the hardest (group 3) saw the greatest EPOC effect: They burned an average of 150.5 calories AFTER they finished exercising. (3)

If you consider that an average person’s resting metabolic rate per hour is around 80 calories… and if you buy the idea that a 5% increase in VO2 max directly translates to a 5% increase in resting metabolic rate… that means your 80 minute workout will help you burn an additional 4 calories every hour for a full day after your workout is over.  Yawn.

You just killed the Afterburn Effect with one bite.

If the idea of killing yourself on the treadmill to burn an extra 96 calories doesn’t thrill you… then you might just want to turn away from this next part.  Because a 1989 study found the average EPOC after 20 minutes of exercise at 75% of VO2 max was just 31 calories (5).  That’s half of ONE oreo cookie.

So What’s The Final Answer?

After reviewing an ungodly number of EPOC studies, here’s my verdict:

According to most studies – and depending on the duration and intensity of your workout – you can expect to burn an additional 50-150 calories over the next 24 hours as a result of your workout.

Meanwhile… Back In The Real World:

Exercise studies typically take place in a laboratory setting. Trying to translate laboratory results to the real world can cause problems. Here are a couple “real world” problems that may undermine the labortory EPOC results:

#1) One study found that cardio exercise can increase appetite and test subjects ended up eating 100 calories MORE than they burned during the exercise session. (6) Not only would this undo the calories burned during the workout, but this would undo any EPOC effect as well.

#2) You’ve probably had the experience of completing a demanding workout only to find yourself completely wiped out for the rest of the day. A brutal 60-minute workout will certainly burn calories and increase your EPOC, but if you end up pinned to the couch for the next 23 hours you’re reducing the amount of calories you’d burn if you were more active.

The research clearly indicates a hard training session will give you some boost in calories burned after your exercise session is over. So clearly, the afterburn effect is a real thing – even if it’s usefulness is massively over-hyped. So your best bet when it comes to the Afterburn Effect or EPOC? You should just forget about it.

When you walk into the kitchen, eat as if your workout never happened.

Not easy to do. But that’s the key to getting and staying lean.

Want to learn what really burns fat quickly? It ain’t the afterburn effect. Everything you need to know about getting lean as fast as possible is revealed inside my book, The Underground Fat Loss Manual. People love it. You will too.

Matt Marshall is a fitness writer and researcher committed to uncovering the truth about health and fitness. His book reveals the fastest way to get lean.
www.BannedFatLossMethod.com