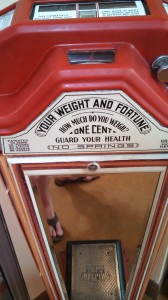 Does this scale think you’re fat?

I took my kids to Silver Beach in St. Joseph, Michigan last week.

It’s a sleepy beach town. Apparently there was a swingin’ amusement park down on the boardwalk 100 years ago. That’s long gone now but they still have an original carousel, some fun house mirrors and even an antique carnival scale.

The scale caught my attention. Not just because it was old and painted bright red.

But because it had charts that told you exactly how much you should weigh — right down to the pound! For example…

And if you’re a man standing 6’1, then you should weigh 170lbs.  At least according to this century-old carnival scale.

Obviously, I don’t think these numbers should be treated as gospel.

To be perfectly honest, if you want to get a lean and athletic physique than I personally think 126lbs is a little high for a woman at 5’3… and 170lbs is a little light for a man at 6’1.

But I do like the idea of having a chart with cold, hard numbers to shoot for.

One Answer For A Million Different Questions

Like anybody else in the fitness industry, most of the questions I get are about fat loss, losing weight, getting abs, or getting ripped.  Every question is different.  But more often than not my answer is the same:

Q:  How I can elevate my testosterone levels?

Q:  I can only see my top two abs, but I want a full six-pack.  What exercises should I do? 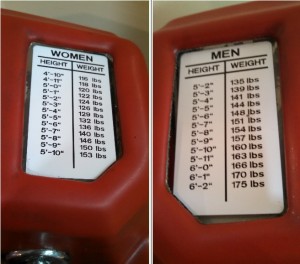 So let me put forth a simple rule, using this creepy old-school carnival scale.

Rule For Men:  Men should weigh 0-20lbs MORE than the target scale weight listed on the carnival scale (but not more if your goal is a lean and muscular build.)

Let me make one thing perfectly clear:  It is IMPOSSIBLE to give someone a hard target of exactly how much they should weigh to find their ideal physique.  That is not my intention.  I am simply pointing out that MOST people need to lose some amount of fat to achieve their ideal physique and most people don’t have a clear goal in mind of how much fat they need to lose to achieve the look they want.

So by using these rules, you can give yourself a benchmark to shoot for.  You may never hit the carnival scale target weight (and you may not WANT to) but at least you will have some numbers to work with.  As you gain experience you can decide for yourself whether these numbers are a good measuring stick for you or not. 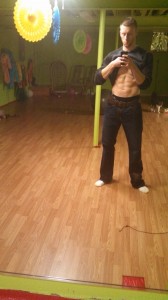 This is me, roughly 7-8 pounds over my “carnival target weight.”